Titus Kaphar has been creating a name for himself within the art world for the past several years. The Yale graduate’s interdisciplinary practice attempts to destabilize historical narratives and the art canon through the pieces he makes. The artist’s latest venture The Jerome Project, a solo exhibition which is on view until March 8th at the Studio Harlem Museum, gets right at this very subject matter. The Jerome Project looks at a specific historical dialogue within the U.S. while also raising issues surrounding the criminal justice system, race and other social and cultural sites.

This exhibition comes out of research Kaphar began almost five years ago. In 2011, Kaphar began searching for his father’s prison records. After visiting a website containing images of mugshots, Kaphar discovered there were many men who shared his father’s name. Using the images Kaphar found on the Internet of men named Jerome, he proceeded to make small scale panel paintings of the them. Although these works function as individual pieces they are also meant to represent the larger African American male community who make up an overwhelming number of the prison population. 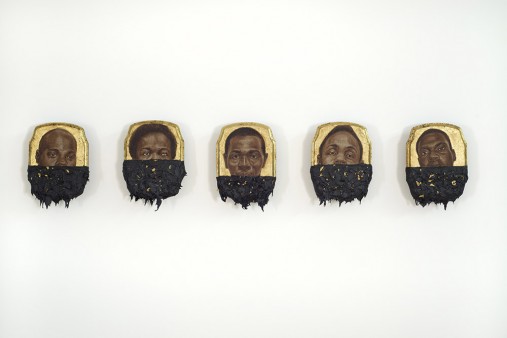 After the portraits were complete, Kaphar began to cover parts of the paintings in tar. Originally the tar covered portions of the panels was meant to represent the percentage of life each person had spent in jail. However Kaphar later abandoned this idea when he looked at the various counts that each man had been imprisoned for and what this meant on a larger scale. As the project developed, Kaphar let the paintings be submerged for up to a month. This resulted in the tar reaching as far up to the mouths of the men he had painted. This new iteration of the project was meant to comment on the silences these men suffered at the hands of the state and the prison system. The tar also “obscures the men’s faces and provides a kind of privacy that was not afforded to them on the mug shot website, which are part of the public record.” This notion of public and private spaces also adds another layer of complexity to the work.

The gold-leaf backgrounds and single figures within the frame of the panels reference Byzantine paintings of saints and other religious iconography. By appropriating this style, Kaphar is making a strong statement with his contemporary subject matter. It is this mashup of history and fiction which helps to create visually striking paintings that engage the viewer on multiple levels. Given the religious undertones of the style Kaphar is borrowing from there does seem to be an implied level of guilt and forgiveness. However Kaphar is more interested in calling attention to this notion through the subjects he is depicting and what this means in a larger historical context. The Jerome Project is not about an assumed guilt or innocence but more about the “inability to offer forgiveness as a shortcoming of the criminal justice system.”